In 1962 Bickford Brannen began his flute-making career as an apprentice, working first in the original Powell shop on Huntington Avenue in Boston, then in the Heritage Department of W.T. Armstrong in Elkhart, Indiana. He returned to Powell as General Manager in 1970. In 1974 while still at Powell, Brannen and his brother Robert co-founded Brannen Brothers Flutemakers, Inc., to produce conical Böhm flutes and piccolos. They incorporated in 1978 and began producing the well-known Brannen-Cooper flutes. Brannen served as president of the company until shortly before his 2007 retirement.

Brannen’s work as a flute designer and craftsman has produced many acoustical and technical innovations, but far more important to him are the successful collaborations that he has had with such great minds as Albert Cooper, Johan Brögger, David Straubinger, Eva Kingma, Robert Dick, and others, all of which have lead to lasting friendships as well as successful products. His latest project is the design and development of the Avanti flute by Conn-Selmer. It is his hope that this endeavor will help to preserve American jobs while producing affordable high-quality flutes made entirely in America. 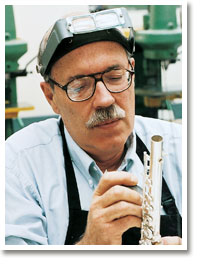 Bick Brannen’s life has been focused around the Boston and Elkhart, Indiana, areas. He had a summer job at Powell and in 1962 began an apprenticeship under Eddie Almeida. In the late 1960s, he became general manager of Powell Flutes. During a lengthy blizzard somewhat later, Bick and his brother Bob decided to make flutes together. They went on to form Brannen Brothers Flute Makers, which developed into an extraordinarily successful company. Bick’s employees remember every aspect of the business being “first class,” with no expense spared in the pursuit of excellence.

Bickford’s knack for surrounding himself with expert people is key to his success, and has only intensified his legacy to the younger generation of fabulous makers and technicians, who say they can never adequately express their gratitude for his pivotal influence in their lives. They hope to pass on this generosity and openness, and to follow his path of developing the flute with great integrity. His employees and collaborators all speak, with deep respect, of the trust Bick has placed in everyone he worked/works with, encouraging them to try whatever they wanted to try, with unfettered access to machinery, supplies, and camaraderie.

Bickford Brannen has now gone full circle and more, having worked again back in Elkhart, where he focused his talents on improving the design and production of student model instruments. Besides being hugely beneficial to our students, Bick also saw this consultancy as an essential step toward retaining American-based production of student flutes. Bick’s collaborations and creativity are still producing significant milestones in the development of the flute. He has led the flute-making business to a higher level of excellence, and we all recognize how vitally important his work, and he himself, is to the flute world. We are all extremely delighted to see this Lifetime Achievement Award be given to Bickford Brannen!