The product of a musical household, Jim Walker grew up Greenville, Kentucky, where his early life was filled with piano and flute lessons. A scholarship to the University of Louisville started him in the direction of music education—but the “orchestra bug” bit him, committing his efforts to classical flute. Following college, Walker enlisted in the Army and went to West Point to join the USMA Band, simultaneously studying flute with Harold Bennett. In 1969, an audition with the Pittsburgh Symphony landed him the position of associate principal flute. After eight years in Pittsburgh, Walker set his sights on Los Angeles and won the principal flute position with the Los Angeles Philharmonic.

Jazz had always been a hobby, and exposure to L.A.’s live music scene rekindled his interest in jazz improvisation. By 1980 (after three years of improvisation practice) he was ready to move beyond the classical world, organizing a quartet featuring flute, piano, bass and drums. This tradition-breaking group became Free Flight. Leaving the Philharmonic to gain the freedom to pursue the group and the freelance life was a risk.
But many recordings, successive “most valuable player” awards, a number one record, four appearances on “The Tonight Show,” features on the “Today” show, concert hall success, and a growing demand for his masterclasses have proven his instincts correct. Few musicians today cross stylistic borders with the ease and beauty that is Jim Walker’s legacy. 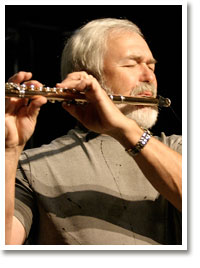 Raised in Greenville, Kentucky, his first musical hero was his dad, a jazz clarinetist and public school band director. He attended the University of Louisville. His first big job was the U.S. Military Band at West Point, then off to the Pittsburgh Symphony as associate principal, and finally principal flute with the Los Angeles Philharmonic.

For most people, this is already a phenomenal career, but Jim left the Philharmonic in 1985, because it was limiting other opportunities, particularly the jazz and studio sessions. The arrival on the music scene of Jim’s jazz quartet Free Flight, with their unique jazz-classical fusion style, was electric. They have appeared on the Tonight Show, Today Show, and hundreds of festival concerts. For two decades, Jim has been a first-call studio flutist, and his bold, expressive playing can be heard on hundreds of soundtracks and commercial recordings.

Jim’s teaching career has included positions at Duquesne University, Carnegie-Mellon, and the University of Pittsburgh. Since arriving in Southern California, he has been a visiting professor at the University of North Texas, the University of Texas-Austin, and Arizona State University. He is senior lecturer and coordinator of flute studies at USC’s Thornton School of Music and instructor of flute and chamber music at the Colburn Conservatory of Music. He is dedicated to his students, not just as their flute teacher but also as their life mentor.

In the NFA, Jim has been as generous as he has been with everyone else in his life. He has served twice on the board of directors and has contributed his artistry, energetic charisma, and professionalism on innumerable concert performances, masterclasses, and panel discussions at our conventions.

Jim Walker is a living legend, and we are proud to award him the NFA’s 2008 Lifetime Achievement Award.