Trevor Wye studied the flute privately with both Geoffrey Gilbert and the celebrated Marcel Moyse. He was a freelance orchestral and chamber music player on the London scene for many years and has made several solo recordings. He was formerly a professor at the Guildhall School of Music, London, and for 21 years at the Royal Northern College of Music in Manchester.

Trevor Wye is the author of the Practice Books for the flute, which have received world-wide acclaim having been translated into 11 other languages. His wrote a highly praised biography of Marcel Moyse and in 2009 his book Efficient Practice was published in the U.S. His latest book, Fantastic Flutes: 60 Things You Can Do with Flutes, was published in 2011. He has made many flute group arrangements including a number of jazz pieces, especially for the groups Wye’s Guys, Wye’s Men, and the Japanese group, The Bluebelles. 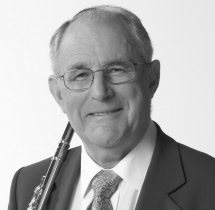 During the winter, he teaches at his Flute Studio in Kent, a residential course for post-graduate students, and travels throughout the world including for annual appearances in the U.S., Europe, Taiwan, and Japan giving classes and concerts, including the Carnival Show, 50 Variations on the Carnival of Venice for 60 Flutes and Piano. He enjoys serving on juries for international competitions, always traveling in business class, having a fear of it being known that he crashed in economy.

He is the founder of the British Flute Society and possesses a current Class ‘C’ Explosives License, issued by the British Police, though these two facts are totally unrelated. In 1990 he was made an honorary Fellow of the Royal Northern College of Music by the Duchess of Kent.