If you've never been to the Annual NFA Convention, you're in for a treat! Hear are some digests from sessions at the 2018 convention Orlando to give you a taste of what's in store.

To view the schedule for the 2019 convention, August 1-4 in Salt Lake City, click here.

I was delighted to be involved in a concert dedicated to 350 Years of historical flutes. I began the concert on a Renaissance flute made by Puglisi, playing “Amarilli mia Bella” by Van Eyck from Der Fluyten Lustof, c. 1644. The harmonic mode suits the flute well.

The next flutes in the concert were reproductions of Palanca and Grenser flutes c.1765 and 1796 respectively. Leela Breithaupt, Barbara Hoskins, and Nancy Schneeloch-Bingham performed suites by Joseph Bodin de Boismortier and Michel de la Barre.

All the flutes in the next stage of the concert were originals not reproductions. The first, a boxwood flute with four lever keys made by Asa Hopkins in Litchfield, Connecticut, c.1830, was played by Barbara Hopkins. She performed “Hancock Light Infantry Quick Step,” published in the Boston Weekly in 1841, and “Gallop” and “Waltz” by John L. Downe. Kelly Nivison performed on a 13-keyed Romantic flute by Heinrich Friedrich Meyer (1814–97) c. 1880. Nivison’s flute has an ivory head, which produced a particularly rich, warm, and expressive tone. She played Divertissement no. 4 by Charles Keller.

Wendell Dobbs then treated us to a Rossini song arranged by Tulou and Carulli for flute and guitar. Júlio Ribeiro Alves played on an original guitar from 1849; Dobbs matched on a Tulou system “flûte perfectionnée” by Jacques Nonon, c. 1855.

I ended the concert with Johannes Donjon’s Elégie-Etude, which I played on a Böhm system, Louis Lot flute no. 435 made in 1859.

Where are we heading in the next 350 years?

Nicholas Buonanni gave a moving performance of two vocalises from the collection Three Vocalises. This arrangement (by Chris Potter) for alto flute and piano left the audience in a momentary trance after the haunting, lyrical melodies sang from Buonanni’s flute. Three Spirituals, arranged by Marietta Simpson and Evelyn Simpson-Curenton and performed by Graham, was a fun, upbeat, exciting work. It offered both technical challenges and meaningful lyrical moments to suite every listener.

Other works were Phyllis Avidan Louke’s Sonatina for two flutes; a selection from A Little Tango in Her Blood arranged by Alison Young; Five Duets by Sadial Cuentas; and Pop by Tim Hagen, an entertaining and challenging work full of extended techniques.

This sensational concert was full of new works that should be explored. The pieces offer a variety of difficulty level and something for every flutist’s taste.

The National Flute Association recognizes that regional and local flute nonprofits do foundational work in building flute communities across our country. Its annual flute club panel brings together a team of experts to discuss pressing issues for leaders in local and regional nonprofit flute organizations.

This year’s panel was put together by Kelly Sulick, the chair of the NFA Flute Clubs committee. Eight individuals served on the 2018 panel. 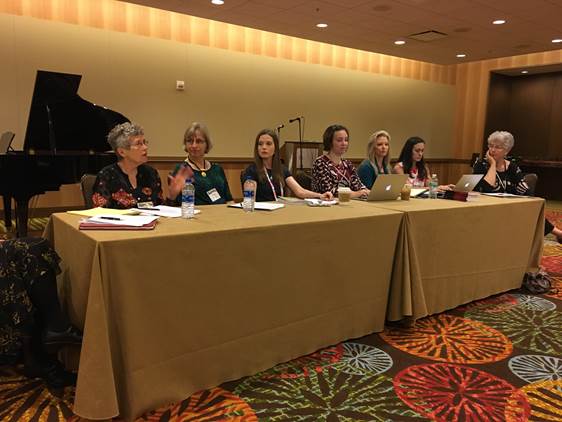 Since the panelists fielded a lot of varied, specific questions, this panel was tailored to the needs of audience members. All had opportunities to participate and share ideas and questions about what might work in their flute societies or clubs. A great deal of interest was generated for legal issues, online content, and event programming.

This event encouraged me both as a participant in the panel and as an observer of the answers of all of my colleagues. My takeaway is that the better we can help local and regional flute organizations reach their goals, the more we can do for flutists of all ages and levels.