Hubert Laws has been a pioneering “crossover” musician from the outset of his career, moving naturally between Classical, Jazz, Pop & Rhythm and Blues idioms. Born into a musical family in Houston, Laws was exposed to a variety of musical styles at home and in school. He studied privately with Clement Barone and won a scholarship to Julliard School of Music, where he studied with Julius Baker and earned his degree. As a Classical Musician, he has appeared as soloist with the New York Philharmonic as well as orchestras of Los Angeles, Dallas, Chicago, Cleveland, Detroit, and Amsterdam. He has been a member of the New York Philharmonic and Metropolitan Opera Orchestras. Mr. Laws’ collaborations include session work with Quincy Jones, Miles Davisa, Herbie Hancock, Chick Corea, Ella Fitzgerald, Sarah Vaughn, Freddie Hubbard, Paul McCartney, Paul Simon, Clark Terry and Leonard Bernstein. Mr. Laws maintains his own publishing companies, Hulaws Music and Golden Flute Music, and he founded Spirit Productions in 1976 to produce his own albums and those of promising new artists. He was selected the No. 1 flutist in Down Beat readers’ polls ten years in a row and was the Critic’s Choice seven consecutive years. 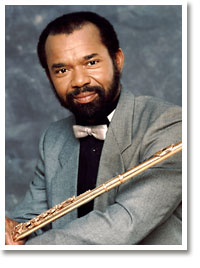