Mintener coordinates Chinese Orphans Project of First Baptist Church in Madison. Eleven years ago, she began organizing and performing in annual concerts for the benefit of rural Chinese orphaned children. Many local flutists have performed in the concerts, including the entire Madison Flute Club. In addition, several other NFA members have volunteered to come to Madison at their own expense to perform in the concert, including Alexa Still and her harpist daughter, Jonathan Keeble, Patricia George, James J. Pellerite, and Roberta Brokaw. 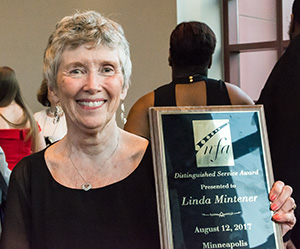 The project’s purpose is to provide funds to obtain an education for orphaned children who have lost their parents to AIDS. The project then expanded to include children who had been abandoned or whose parents had died of other causes. In the past 11 years, the annual free-admission Chinese Orphans Benefit Concerts have raised enough funds and sponsorships to send hundreds of children through school as far as they were able. This past school year, 95 children were in school—nine of them in college. Five have graduated from college and become self-supporting in professional jobs. Mintener and her husband, Bob, frequently travel to the rural Henan Province villages to visit the children in their homes.

After graduating from college, Mintener spent two years with the Peace Corps in Guinea, West Africa, where she taught flute at the Lyceé Classique de Musique in Conakry and worked as a French/English interpreter on the hospital ship for Project Hope. She has travelled throughout western Africa.

Mintener is also a graduate of the University of Wisconsin Law School. Until her retirement, she worked for 28 years for the Wisconsin Department of Revenue as a litigator of their large-claim, complex sales-tax cases. She was also a representative for the Wisconsin State Attorneys’ Union and a member of its bargaining team. It has been her great pleasure to serve for the past 14 years as the NFA’s legal counsel. She has appreciated that NFA is the one place that has recognized her as both a lawyer and as a musician.

Mintener adopted two daughters as babies and subsequently married Bob, who had adopted a baby and had a daughter from a previous marriage. Their children are now adults with children of their own. Linda and Bob have seven grandchildren and two great grandchildren, all of whom (except the baby) are coming to the convention from as far away as New York, Michigan, and Washington, DC.

The Minteners love to travel. They spent four summers in rural China teaching English to English teachers, have participated in wheelchair distribution projects in Jamaica and Vietnam, and have travelled for pleasure to many other developing and developed countries.