Peter Lloyd is former principal flute with the London Symphony. He studied with Fernand Caratgé and Jean-Pierre Rampal in Paris and at the Royal College of Music in London. He also has taken lessons and masterclasses with Marcel Moyse and Geoffrey Gilbert. Before joining the London Symphony in 1967, Lloyd held principal flute positions in the Scottish National, Halle, and BBC Philharmonic Orchestras. He tours frequently with the Barry Tuckwell Wind Quintet, the London Virtuosi, and the English Taskin Players. He has recorded albums of French music, wind quintets, and concertos, and has played on hundreds of orchestral recordings with the London Symphony and other groups. He has taught in Scotland, the Guildhall School in London, and the University of Indiana-Bloomington, and currently teachers at the Royal Northern College of Music in Manchester. He also gives masterclasses and recitals throughout Europe and the Far East.

Lloyd notes, “I have always been a lucky person, as all my life, work came along just when I needed it. Firstly I was given the second flute in the Scottish National Orchestra, and found myself sitting between two Paris-trained players who had been with Fernand Caratgé. I was blown over by the technical perfection that they had.” Of his experience studying with Rampal, he says, “What a wonderful inspiration he was! A great player and an equally great man. I began to understand much more about the psychology of the arts than I ever imagined.” 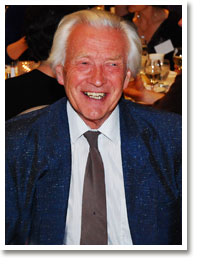 When Lloyd left London in 1987 after 20 years to accept an offer from Indiana University-Bloomington as professor of flute, he shifted his training focus to teaching, spending “six years of development of my teaching ability and six years of wonderful friendship with talented students who I still meet from time to time.”

In 1989, following the death of Gilbert, active NFA member Nancy Clew suggested that Lloyd take over Gilbert’s summer classes. “That was an extraordinary honor for me,” says Lloyd, “and, of course, I accepted.” In 1993, Lloyd returned to England to teach at the Royal Northern College of Music.

From the 2007 convention awards ceremony:

“Have you ever heard the music to Star Wars, recordings of the Barry Tuckwell Wind Quintet or the London Philharmonic?  If so, you have been listening to the extraordinary playing of English flutist, Peter Lloyd.  Performer in these groups and many others for over twenty years, teacher at summer Oxford classes, Indiana University and now the Royal Conservatory of Music in Manchester, England, Peter Lloyd is revered by students and music aficionados everywhere.”
—Katherine Borst Jones, from her presentation speech.

Peter Lloyd has had a long and distinguished career as soloist, orchestral and chamber musician, and he is an inspirational teacher as well.  He has worked with Caratge, Rampal, Gilbert and Moyse.  He is former principal of the BBC Northern Orchestra, London Symphony Orchestra and Royal Philharmonic Orchestra.  After leaving the L.S.O. in 1987 he spent six years as professor of flute at Indiana University, before returning to the Royal Northern College of Music as head of flute studies since 1993.  He continues to travel internationally, teaching and giving master classes annually in Australia, USA and Canada.  His extensive pedagogical work is now available on CD Rom.

Lloyd’s eloquent comments are often quoted by his former students.  For example,  “you don’t make a sound – you allow it,” and “an hour of scale work a day for a month will drastically transform your playing,” and “you don’t practice to improve your best, you practice to improve your worst,” and “I’m not trying to teach you to play the flute, I’m trying to teach you to teach yourself,” and “It’s not about YOU, it’s about the music.”  Lloyd comments on his life as a musician, “The extraordinary fact about all the Arts is that although we can never achieve our ideal we can still strive to get nearer throughout our lives.”