"The NFA has been important to me, so it’s time to give back."

We sat down with longtime NFA member Hal Ide, who painted the cover art for the 2022 NFA Convention program book. He shares a peek into his process for creating the piece, how he picked up painting later in life, and what he looks forward to most about this year's convention.

Why is the NFA important to you?

People. It connects us flute players. I’m an amateur flute player; I’ve never made a living as a flutist. I’ve always been dedicated to it, I’ve kept it right up and I always try to do better, and this connects me with people like myself—those of us during our working lives who got up early to practice an hour before work. Those of us who turn down friends to go to a movie because we had to learn that etude. And that is so, so, so valuable to you when you are on your own in your studio just practicing; that’s kind of a vacuum. This—meeting the other people and knowing they’re there and being in touch with them—keeps you motivated and interested. There’s so much sharing that goes on between people that way—like, “Do you feel this way about that?” “My God, yes! Thank God there’s someone else who knows this feeling!”

Also, my undergraduate and graduate degrees in music are in composition, and the NFA has been so proactive and so aggressive about commissioning new works and presenting new works, and boy, that’s invaluable.

That piece about the people and the connection is something we hear over and over again—people really value that.

So I'll have to come to Chicago! [The convention] just has to be in person this year! 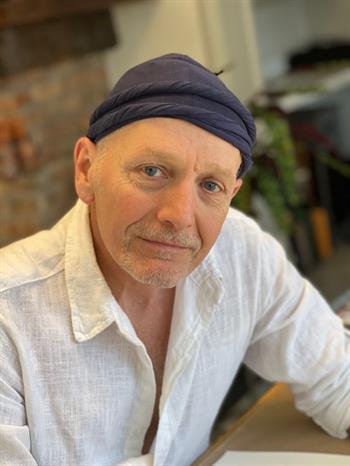 Speaking of which, how did you end up creating the painting for this convention?

I retired from my job at the University Auditorium at the Performing Arts Center [at the University of Iowa] seven years ago, and I was looking for a new life, so I thought I would try painting. I took up watercolors, and it was like when you're a kid and you discover books and you could just read for hours and hours and the time melts away and your mom’s calling you for supper. So I just kind of got lost into this world of painting, and it took over my life.

I started posting my paintings on Facebook, and people really liked them. I’ve managed to nab a gig as artist in residence with the National Parks in 2017. And that’s a matter of just: you see something you wanna do, just walk up and ask. You never know what’ll happen! And [NFA 50th Anniversary Committee Chair] Cathy Miller had seen my work over the years and said, “I think this is the guy!” So she asked and I said yes.

I’m 67 years old; this was a moment for me that brought so many things together that I love, that I absolutely adore. My reason for existing! Painting and the flute. If we could’ve worked swimming in there somehow, it’d be perfect.

When you talked about what motivated or preceded your picking up painting, you said you were looking for a new life?

I wanted to see myself in a whole new mirror in a certain way. My job at Performing Arts Center was intense. I never had a free weekend. And in the summers when the academic year was over, we were busy doing season tickets for the next year. It was a great job—it was never boring, every curtain time was a deadline and always something new, we did a lot of commissioning, and things like that—but boy, was I ready [to retire]! Happily ready.

It just seemed like it was time to recreate myself a little bit. I needed something new to motivate me and excite me and keep me sharp as I get older.

Pivoting to this specific painting, why did you choose this particular imagery and how does it represent the 50th anniversary convention?

Cathy put me in touch with Aaron Goldman, the program chair for the convention, and he talked about what his plans were. I initially started thinking only of colors, and colors associated with a golden anniversary. So, gold: first color that comes to mind. I asked around with a couple accomplished, award-winning, internationally known artists, including my mentor Marcia Wegman, and everybody said, “Ooh, boy. Stay away. It doesn’t photograph well; it doesn’t reproduce well.” So I kind of abandoned that.

I started thinking of laudatory colors: rich blues and purples, like graduation robes. Vestments, sort of royal colors. Then I had a second conversation with Cathy and Aaron. I sent them a couple images and Aaron had at that point pivoted just a little bit; he said that he was really thinking about evolution—how the NFA has evolved and how it has grown, and could we get a little bit of that into the painting? Or a lot of it.

So here I am an eight-year-old artist trying to paint evolution. So I Googled it! And what I came up with was fish crawling out of the sea turning into an ape turning into a human. Right? I painted a bunch of different things—flutes growing out of roses and undergrowth and flowers, a flute coming out of a dream into existence—and sent those off. We felt like I was really close. We talked it through some more. I thought about the whole marketing side of all this and had some really great conversations with Aaron—really productive, such a nice gentleman. (I mean, this is the principal flutist of the National Symphony Orchestra; I was afraid to even talk to him! But just the most gentle, wonderful man.) 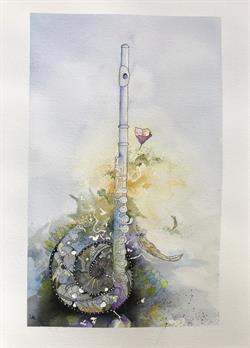 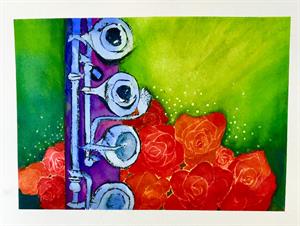 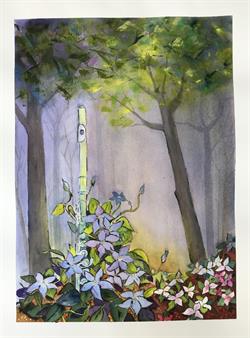 I didn’t feel at all like I was hitting the mark. I was sort of all over the map. So I sat down and got out all my old program books from the NFA and looked at what the art had been in the past. Most of the time, it is something that identifies the location of the convention. There is a notable poster from a fair while ago by Patty Adams, who is a marvelous flutist and award-winning watercolorist, of multiple flutes from different eras—old wooden flutes, modern flutes, and things like that. And that is the best piece of art I had seen from the NFA there. It also killed my idea for evolution. 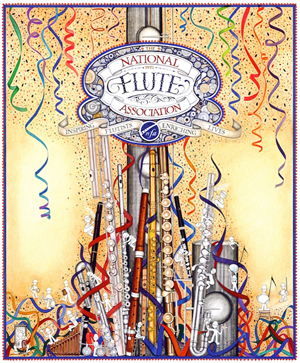 So going back to the art showing the locations, I thought, Maybe I can work some of that into here. I sat down for a long time and thought, What is the absolute best thing about Chicago? What I came up with is that it’s right on Lake Michigan. Lake Michigan is a powerful thing, right? So that’s where the colors come from—greens and blues and sand.

I call the piece Key Change. It is a musical term, but this is also how those keys evolve or change as they rise through the painting.

Back to thinking about the painting—to get your message across, you get what, one or two seconds maybe that somebody will look at this? It’ll be on the cover of the program book or the header of a blog or something like that and boom, and it’s gone. You’ve gotta be smart! I wanted something that could go from a kind of a pretty jumble in your eye to “Oh! Those are flutes!” in just a very quick moment. I left all those G sharp keys unpainted in white to help with that trick.

And that is actually the second version of that painting. There’s an earlier version which I sent Aaron and he said, “Yes, this! This! I like this!” I said, “OK, but let me try and do a little more with color,” and I tried to put a little gold in up at the top there. 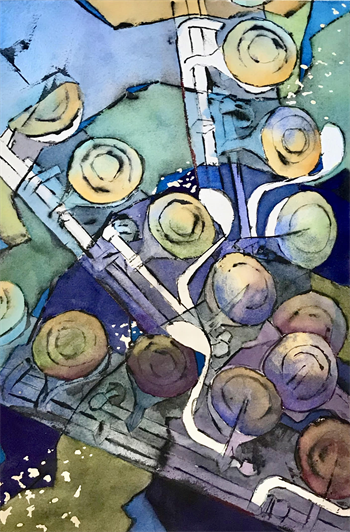 What are you looking forward to most about the convention?

There’s one thing that I always look forward to, and that is hearing new works. That is my primary source of joy. However, this time it is reconnecting with old friends and meeting new people. Absolutely. I am starving for that.

I just want it to be known what a marvelous opportunity this was for me. And how it so beautifully brought together these things in my life that I love. And that it really, really, really felt like my moment—here’s my opportunity. Here’s my chance to do something and contribute. And boy, is that a wonderful feeling. 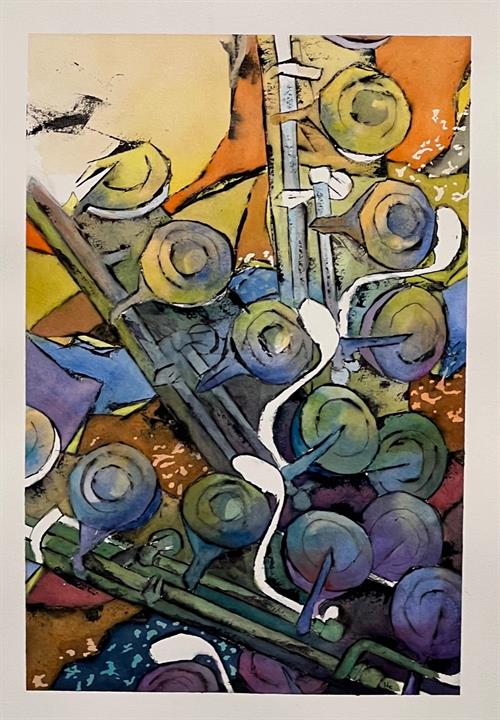 —Hal Ide's artist statement—
"Key Change attempts to depict a feeling of evolution along with a sense of celebration and accomplishment. My color inspiration came from that powerful entity, Lake Michigan, moving from the depths to the shoreline, after all, the lake is why Chicago is where it is! My intent with the composition is that it may take your eye a moment to recognize that these are flutes.. that the image would 'evolve' in your eyes. Celebration and accomplishment I depict with colors turning from cool at the bottom to warm at the top. I wanted a deep sense of pride and satisfaction, gained via accomplishment and hard work, not balloons and fireworks. The flute has been a life-long tool for personal evolution for me, by my side through thick and thin. I hope that is in the painting as well!"