This program was a sort of Gesamtkunstwerk merging flute playing with poetry, recorded sounds, visual imagery, dance, and drumming.

Wendy Rolfe performed the NFA premiere of Harvey Sollberger’s new work, “Aristotle and the Universal Flute: A Musical Wunderkammer” for a flutist and tape. The piece, written for Rolfe, is not a solo with accompanied sounds but rather a setting of Billy Collins’s poem, “Aristotle,” read by Sollberger (b. 1938) on the tape. The flute functions like the piano in an art song, underscoring and commenting on the text, along with a plethora of sounds on tape. The profound and moving poem is in three stanzas, beginning, in turn, “This is the beginning … This is the middle … And this is the end,” with various metaphors for birth, life, and death. Interspersed are musical quotes from other works by Sollberger (I recognized his Silent Film Suite), and the piece ends with a sentimental waltz for flute and accordion. (Before he become a leading voice in contemporary music as a flutist, conductor, and composer, the young Sollberger was a virtuoso accordionist.)

Viviana Guzman, with Mike Sammons, assistant professor of percussion at the University of Utah,  performed her own evocative work, “7th Veil” for flute and drum. She explained that the piece was inspired by her visit to the Egyptian pyramids, and it uses Middle Eastern modes and rhythms and incorporates Egyptian-inspired dancing.

Caen Thomason-Redus turned in a virtuoso performance of a solo work written for him in 2013 by American composer Shawn E. Okpebholo (b. 1981), “On a Poem by Miho Nonaka: Harvard Square.” Nonaka is a Japanese-American poet. Okpebholo’s work is not a programmatic setting of the poem, but rather an atmospheric reaction to it, utilizing a host of extended techniques—bamboo tones, residual tones, pizzicato, jet whistle, tongue ram, multiphonics, singing while playing, key clicks, and flutter tonguing.

The final two works on the program combined flute playing and movement, a medium used by Karlheinz Stockhausen starting in the late 1970s and perfected by New York flutist Zara Lawler and Hilary Abigana of The Fourth Wall Hybrid Arts Ensemble. This mode of performance, of course, requires the music to be memorized.

Martha Councell-Vargas performed the contemplative “To Invoke the Clouds” by John Thow (1949–2007). The piece, based on a Hopi melody, was originally conceived in 1995 for Baroque flute and later adapted for the modern flute. Councell-Vargas’s performance was set to a backdrop of a video of slow-moving clouds and choreographed by Elizabeth June Schubkegel, herself a flutist and dancer.

Nina Assimakopoulos played and danced (and at times sang) “Sounding Landscape” by Slovenian composer Alojz Ajdič (b. 1939). It is similar in mood to Takemitsu’s “Air,” starting calmly and becoming more intense. Assimakopoulos described the piece as invoking breath “that flows through our life and creates sound.” She designed her own choreography in conjunction with others.

The program was a fascinating juxtaposition of composers from different heritages, blending music with other media in a variety of ways. 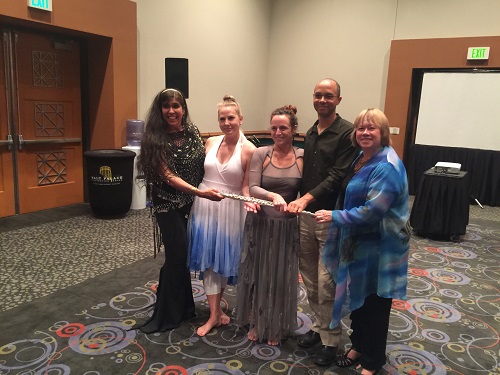 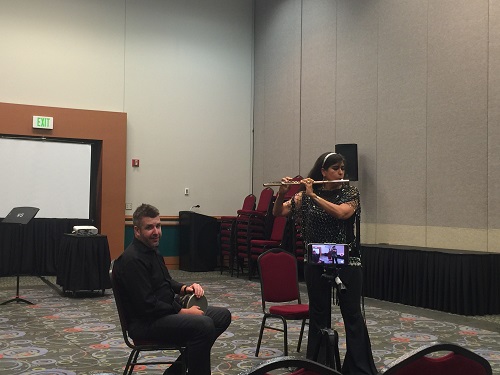 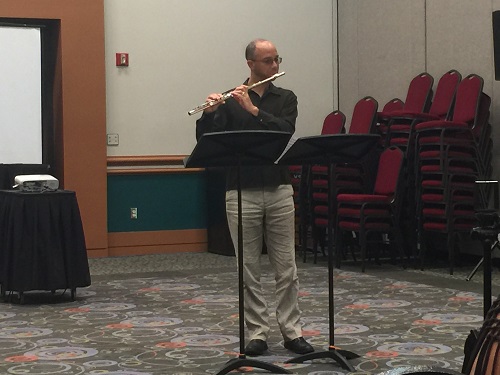 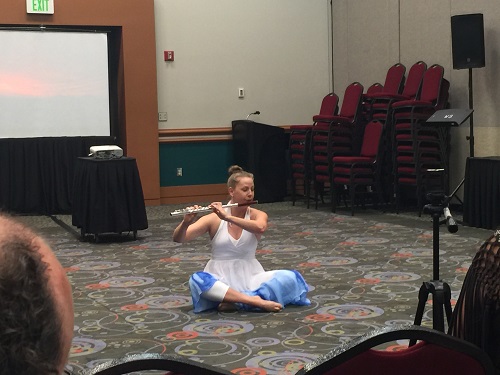 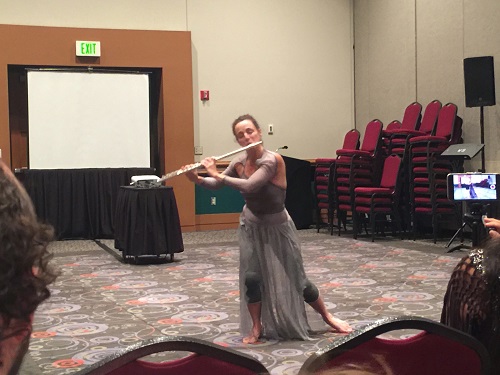