Alexander Murray’s deep and varied career spans 75 years of involvement in music. Born in 1929 in South Shields, England, he was sent as a boy, in 1940, to live in South Africa for the duration of World War II. During his first year in Cape Town, he studied with 21-year-old David Sandeman. After four years without instruction but playing in the University Orchestra in Johannesburg, he won a scholarship to the Royal College of Music.  Following draft years in the Royal Air Force, a French Government Scholarship took him to Paris and study with Gaston Crunelle at the Conservatory. There he was awarded first prize playing Messiaen’s newly composed Merle Noir.

During the 1950s, he was principal flutist, initially with the Royal Opera in London and then with the London Symphony Orchestra. He married dancer Joan Elvin in 1954.

Also in the 1950s he and Joan began training as teachers of the Alexander Technique taught by Frederick Matthias Alexander (1869–1955) in London from 1904. Through the following decades both Alex and Joan worked with many first-generation teachers and incorporated the technique into their own work. They have helped introduce their findings to musicians and broader constituencies in the United States. 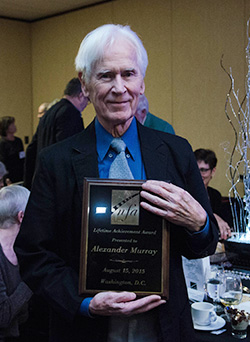 During a tour in the U.S., Murray was offered a teaching position at Michigan State University, joining its faculty in 1967, remaining there until 1974, when following a sabbatical visit to Holland, Frans Vester invited him to teach in the Hague. He taught there for three years, also teaching one day a week in Manchester at the Royal Northern College of Music. He was appointed Professor of Flute in 1977 at the University of Illinois, where he remained until his retirement in 2003.

Murray also has been an innovator in flute construction and acoustics. He worked with Albert Cooper, renowned designer and creator of the “Cooper scale,” Jack Moore, and other flutemakers experimenting with flute design and tuning during the mid- to late-20th century. His first project with Cooper involved keywork adaptations that produced the first Murray System flute. Additional work together led to new scale developments, the beginning of what would become Cooper’s legendary scale work.

Alexander Murray is a founding member of the NFA. He promoted the idea of the organization as a “support group” for flutists, based on his youthful memories of playing with other flutists in a spirit of friendliness and non-competitiveness.

Murray’s interest in Tai Chi is due to his close friendship with Chung-Liang Al Huang and the Living Tao Foundation, of which he is a lifetime member and trustee. Flute playing is currently limited to a weekly baroque quartet afternoon with talented amateur friends (two baroque flutes, harpsichord, and gamba).