Belgian flutist Barthold Kuijken was born in 1949. He grew up in a musical environment and became increasingly interested in early music and early instruments. He studied modern flute at the Bruges Conservatory and the Royal Conservatories of Brussels and The Hague.

He began his early music studies playing the recorder, but found a high-quality original baroque flute that became his best teacher. Research on authentic instruments in museums and private collections, frequent collaboration with various flute and recorder makers, and assiduous study of 17th-, 18th-, and 19th-century sources helped him to specialize in the performance of early music on original instruments.

He also performed on a Böhm flute as a member of the Brussels-based ensemble Musiques Nouvelles, focusing on avant-garde music. Soon he started to play with his brothers, Wieland (viola da gamba and baroque cello) and Sigiswald (baroque violin and viola da gamba), with René Jacobs (countertenor), Paul Dombrecht (baroque oboe), Lucy van Dael (baroque violin), and harpsichordists Robert Kohnen and Gustav Leonhardt, and more recently with harpsichordists Bob van Asperen and Ewald Demeyere. For many years he was baroque flutist in the orchestra Collegium Aureum and, later, in La petite Bande, the baroque orchestra conducted by his brother Sigiswald. He plays concerts all over the world, extending his repertory to early 19th-century music (with fortepianists Luc Devos and Piet Kuijken) and occasionally to Debussy. 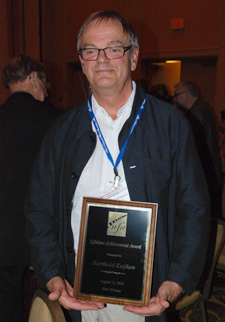 Kuijken has recorded extensively for various labels. Besides his activities as a flute and recorder player, he is appearing more and more often as a conductor and is artistic director of the Indianapolis Baroque Orchestra. His scholarly work includes articles in various journals, a new annotated Urtext edition of J.S. Bach’s flute compositions (Breitkopf & Härtel) and the critical edition of the six C.P.E. Bach flute concertos for the C.P.E. Bach Collected Works Edition (Packard Humanities Institute). For more than 30 years, he has taught baroque flute at the Royal Conservatories of The Hague and Brussels (where he is also the head of the historical instruments department), and he is often invited to serve as guest professor or as a jury member in international competitions. His book The Notation Is Not the Music—Reflections on Early Music Practice and Performance will be released this year.