Jeanne Baxtresser has held principal positions with three major orchestras, culminating with her 15-year tenure as solo flutist with the New York Philharmonic. Baxtresser appeared as soloist with the New York Philharmonic on more than 50 occasions, where she became a familiar figure on the “Live from Lincoln Center” broadcasts. Since making her professional debut with the Minnesota Orchestra at age 14, she has been the featured soloist with leading orchestras across North America and Europe, including the Montreal Symphony, National Arts Centre Orchestra, St. Paul Chamber Orchestra, Minnesota Orchestra, Toronto Symphony, and at the Mostly Mozart, Spoleto, and Aspen Music Festivals. She was engaged as Principal Flutist of the Montreal Symphony immediately upon her graduation with honors from The Juilliard School, where she studied with Julius Baker.

Following her tenure with Montreal, Baxtresser served as solo flutist with the Toronto Symphony. At the invitation of Music Director Zubin Mehta, she took her position as solo flutist with the New York Philharmonic. Baxtresser’s recordings include New York Legends—Jeanne Baxtresser, one in a series of discs featuring recitals from principal chairs in the New York Philharmonic on the Cala label. Orchestral Excerpts for Flute on the Summit label features her commentary and the major flute solos from the orchestral literature. Additional solo discs include Jeanne Baxtresser, Debut Solo Recording, Montreal 1977, which was recently re-issued by McGill Records; Claude Bolling’s Suite for Flute and Jazz Piano; The Baroque Flute with Maestro Andrew Davis and the Toronto Chamber Orchestra; and The Magic Flute with Maestro Davis at the piano. Baxtresser’s newest book, Great Flute Duos From the Orchestral Repertoire, produced with Renée Siebert of the New York Philharmonic and David Cramer of the Philadelphia Orchestra, was named the 2004 winner of the National Flute Association’s Newly Published Music Competition. Future projects include books on tone exercises and performance. Many of her students occupy principal and section positions in major orchestras throughout the United States, Canada, and Europe. In addition to presenting masterclasses worldwide, Baxtresser served on the faculty of The Juilliard School and the Manhattan School of Music. She is the Vira I. Heinz Professor of Flute at Carnegie Mellon University in Pittsburgh and on the faculty of the New England Conservatory in Boston. 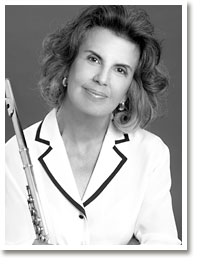 From the 2006 convention awards ceremony:

Of Jeanne Baxtresser’s achievements as a flutist and teacher, NFA Immediate Past President Sue Ann Kahn listed many highlights including upholding an increasingly higher standard of artistic excellence for the flute, its performance and its literature, old and new; enhancing flute pedagogy and music education; creating and sponsoring significant projects relative to the flute and flute playing; and encouraging the spirit of helpfulness and fellowship among (flutists) and the flute world.

“Her life history reads as a clear path moving strongly, positively, unerringly forward,” said Kahn, who described Baxtresser’s teaching as lessons in life skills as well as in flute technique. “The lessons learned: focus on who you are, what you are doing, check your ego at the door, don’t be disheartened by competitiveness or insecurity. Make the music important.”

Past President Kahn’s presentation speech also focused on her interviews with some of Baxtresser’s colleagues. To her amazement, she reported, “…I (was) struck by how her artistry, integrity, dedication, quiet confidence, warmth and wholeness of spirit shines through every interview.”

Prior to her student days at the Juilliard School of Music, Jeanne Baxtresser attended the Interlochen Academy. Her first orchestra position following graduation from Juilliard was principal flute of the Montreal Symphony, followed by 15 years as principal flute of the New York Philharmonic. Baxtresser is currently professor of flute at Carnegie Mellon University in Pittsburgh and is in demand world-wide for her masterclasses and clinics. Of her recent work as a teacher, Kahn said, “She prepares her students for every possibility and celebrates their efforts. Each (student) is helped to see what is really important, how to go beyond insecurities, competitiveness, and ego. Jeanne’s students are now becoming master teachers in their own right; her profound advice reverberates through the years, as her students now help others.”