Mark Thomas, Founder and Honorary Life President of the National Flute Association, is internationally known as a soloist and recording artist, and has made appearances in 49 states and 20 foreign countries. Together with Philip Swanson and Walfrid Kujala, he founded the NFA in 1972 and served as the organization’s first president. He has performed before royalty and heads of state of Europe and Asia and has appeared at the White House before four presidents of the United States. He has served on the artist faculties of George Washington University, the American University, the University of Notre Dame, and most recently the University of North Carolina at Charlotte, where the College of Arts and Sciences presented him with the prestigious Faculty Excellence in Teaching Award (2001), the only music faculty member ever to be so honored. Many of his former students are members of major symphony orchestras and university faculties. Over the years, he has served as artistic design consultant and educational liaison for many leading flute manufacturers. He studied with Emil Opava, Britton Johnson, and William Kincaid, and graduated from the Peabody Conservatory of Music in Baltimore. His Mark Thomas Flute Method, a progressive series, is used by teachers world wide. Thomas is a consulting editor of Flute Talk magazine and is listed in The International Who’s Who in Music, Who’s Who in Entertainment, and Who’s Who in America. He has recorded on the Golden Crest and Columbia record labels. 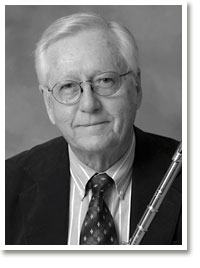 “We thank you for your vision, your courage, and your willingness to stick your neck out. …33 years later we celebrate as an association of over 6,000 members from over 20 countries.” —Katherine Borst Jones on Mark Thomas’ service to the National Flute Association

A special presentation of the NFA’s National Service award was made to Founder and Honorary Life President Mark Thomas, who along with his wife Judy, James Pellerite, Walfrid Kujala, and Philip Swanson founded the NFA in 1972. Hosting a gathering of flutists in Anaheim, California, Mark and Judy Thomas assumed personal financial liability for a contract they signed with the Royal Inn of Anaheim. This meeting became known as the first convention of the National Flute Association.

Following on the success of this first meeting, Mark formed an ad hoc committee to organize the association, hold initial elections, and write the by-laws. Thanks to Mark’s efforts and those of the other committee members, the NFA charter and the organization’s not-for-profit status became official on September 10, 1973, just 11 months after that first gathering in Anaheim.

In her presentation speech, NFA Vice President/President-elect Kathy Jones spoke of the many attributes that make our organization so vital in today’s world. She said, “…the spirit of volunteerism extends from the individuals who run the convention and organization to the performers who inspire us. From the beginning the exhibitors have been on board, providing many services at their own expense as well as their support and encouragement. Now we can all see how the NFA has totally changed the flute landscape. … Everyone shares ideas in an atmosphere of mutual respect. The flute world has been made … much better for the work that you inspired back in 1972.”

In addition to founding the NFA, Mark Thomas has taught many students who have gone on to illustrious careers, and he has performed worldwide, including playing for royalty and U.S. presidents. He has written a flute method and numerous journal articles, has served as a consultant for a major flute magazine, and was artistic consultant and educational liaison for several leading flute manufacturers. In what little spare time was available, Mark designed and built a nationally famous garden railroad!

Kathy Jones concluded her presentation speech with these words: “We come together tonight to thank you, to recognize you for your contributions as Founder and Life President of the National Flute Association. You were the person [who] pulled together the forces to create our NFA. Now over 3,000 of us gather together every summer for inspiration, friendship and renewal…Congratulations!”