Nancy Toff is one of the world’s leading authorities on the history of the flute. She is the author of The Development of the Modern Flute (1979), The Flute Book (third edition, 2012), and Monarch of the Flute: The Life of Georges Barrère (2005) and was curator of the exhibition Georges Barrère and the Flute in America at the New York Public Library for the Performing Arts, for which she wrote the catalog (1994). For her work on Barrère she has received the Dena Epstein Award for Archival and Library Research in American Music from the Music Library Association and grants from the Sinfonia Foundation and the American Musicological Society. She collaborated with flutist Leone Buyse to program and annotate two CDs of music dedicated to Barrère and has contributed numerous articles to professional journals and reference books.

A frequent speaker at music, library, and history conferences and at universities nationwide, Toff has been a consultant to the Library of Congress and the Metropolitan Museum of Art. A past president of the New York Flute Club, she has served on its board of directors since 1986 and is also its archivist. She is a former secretary and member of the board of directors of the National Flute Association, is chair of its archives and oral history committee, and serves on its  special publications and research committees and on the Flutist Quarterly editorial board. 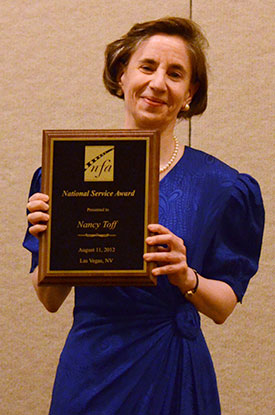 Nancy Toff is vice president and executive editor at Oxford University Press, where she has edited such varied works as Langston Hughes’s The Sweet and Sour Animal Book, whose unpublished manuscript she discovered, and Richard Taruskin’s magisterial Oxford History of Western Music. She has also held editorial positions at Time-Life Books and Music, Vanguard Records, the New Grove Dictionary of American Music, and Chelsea House Publishers. A graduate of Harvard, she studied flute with Arthur Lora and James Pappoutsakis and was a member of the Westchester (NY) Philharmonic.