Paula Robison is one of America’s most active recitalists and recorded flutists. Her repertoire ranges from Bach to Brazilian Chôros, from Mozart to recent American works, from Telemann to Poulenc, from solo works to chamber music and concertos. She has also commissioned over thirty works for flute, including concertos by Beaser, Krichner, Takemitsu, Knussen, and Frazelle. She has been a featured soloist with I Soisti Veneti, the Budapest Strings, New York’s Mostly Mozart and Marlboro Festivals, the London Symphony, and the San Francisco Symphony. She has recorded over 30 albums for a variety of labels, including Sony Classical, CBS Masterworks, New World Recordings and MusicMasters. She is a founding member of the Chamber Music Society of Lincoln Center, with which she has been an artist-member for 20 seasons. For ten years she was co-director of chamber music at both the Italian and American Spoleto Festivals. A native of Nashville, Ms. Robison grew up in California, and studied under Julius Baker at the Julliard School. At age twenty she was invited to perform as soloist with the New York Philharmonic under Leonard Bernstein. She then studied with Marcel Moyse and subsequently became the first American to win the Geneva International Competition. 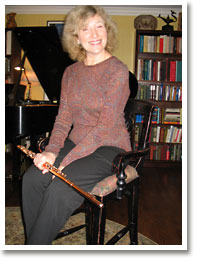