Peter-Lukas Graf, a native of Zurich, studied flute with Andre Jaunet (Zurich), Marcel Moyse, and Roger Cortet (Paris). Graf’s recording of the Ibert Flute Concerto earned him, at age 21, immediate and overwhelming international recognition. Since then, he has performed concert tours internationally, made numerous recordings, and is a regular guest at international music festivals. Graf won the First Prize at the International Music Contest of the ARD in Munich and received the Bablock Prize of the H. Cohen International Music Award in London. He was appointed the youngest principal flutist at the Winterthur Symphony Orchestra and has performed with the Lucerne Festival Orchestra with additional conducting responsibilities. The author of three monographs, Graf is Professor of Flute at the Basle Music Academy, a position he has held since 1973. He was recently awarded the title doctor honoris causa from the Academy of Music in Cracow, Poland, and will receive the premio alla Carriera 2005 from the FALAUT-Academy (Italy). 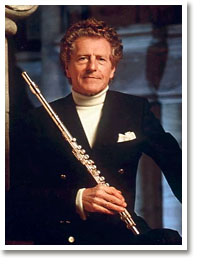 “For Mr. Graf, the flute is only a means to an end—his thought is not about the instrument but about the musical expression: the line, the architecture and structure of the music, intelligent phrasing, and above all, communication.” —John Bailey, from his presentation speech

The Lifetime Achievement Award was presented to Peter-Lukas Graf. In his speech, John Bailey, NFA Immediate Past-President, spoke of Graf’s international reputation as a flutist, chamber musician, recording artist, teacher, and conductor. Graf was solo flutist with the Winterthur Orchestra in Switzerland, conductor at the Lucerne Opera, and later guest conductor for major orchestras worldwide.

His awards as a flutist include first prize at the Munich ARD International Competition and the Bablock Prize from the Harriet Cohan International Music Awards in London. Since 1973, Graf has served as Professor of Flute at the Basle Conservatory.

As an author, Peter-Lukas Graf has published three books on flute playing, The Singing Flute, Check-up, and Interpretation: How to Shape a Melodic Line. He has made more than 40 solo and chamber recordings; his recording of the Krommer concertos with the English Chamber Orchestra won the Grand Prix International du Disque.

Graf’s eloquent thoughts have been quoted in many publications, including a 1983 interview published in Gespräche mit Flötisten (Conversations with Flutists), in which he characterizes his intentions, “…to play so that the listener forgets the flute; so that he listens to the music and no longer thinks about the instrument; that he can take me seriously and doesn’t need to forgive me for my instrument…”  In his concluding remarks, Bailey quoted from a 1989 interviewin which the recipient comments on his life as a musician, “Music lives, and everything alive constantly changes. One never stops learning. Such is life, and such is music.”