Stephen Preston is one of the leading musicians in the development of early music performance in the United Kingdom and Europe, and one of its most respected figures. Preston is also performing and developing new music and contemporary techniques for the baroque flute. He was described as “a genius” after a recent broadcast in which he gave the world premiere of a new work specially written for him. Through his ground-breaking work with historical flutes and solo, ensemble, and orchestral performances and recordings, he established a world-wide reputation and an international career. His area of expertise extends from the 17th to the 19th centuries, and he is as at home with the music of Bach and Mozart as he is with Schubert and Weber. The emphasis of Preston’s work is always on performance practice as a way of realizing the highest degree of musical potential in the performer. His work as a choreographer of historical dance gives him a distinctive insight into the dance music of the baroque and classical periods. He has many years’ experience working with the widest range of students and professional instrumentalists and singers. Stephen Preston’s teaching philosophy extends beyond the narrow boundaries of stylistic performance and he is equally successful whether working with period performers or with modern instrumentalists and singers. His favorite project has been to work with one of America’s most eminent chamber ensembles, the New Century Saxophone Quartet, on its highly praised recording of Bach’s Art of Fugue. Preston lectures, teaches, and coaches at Britain’s four leading music academies, the Royal College of Music, the Royal Academy of Music, Trinity College, and the Guildhall School of Music and Drama. 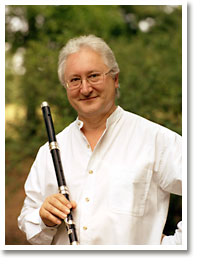 From the 2006 convention awards ceremony:

In presenting the award to Stephen Preston, NFA President Katherine Borst Jones said, “…you have been a courageous pioneer in the early music field both as a musician and a choreographer, a sought-after teacher who believes in showing the way rather than dictating it.” Referring to Preston’s many achievements, Borst Jones cited the influence on his career of an 18th century boxwood flute loaned by Arthur Watts, the vice-consulate to the Suez and an amateur recorder player, as well as study with Belgian gambist Wieland Kuijken. Among Preston’s many achievements were his membership in the original English Consort, the Academy of Ancient Music, the London Baroque Soloists, and the English Baroque Soloists.

Preston’s teaching career includes posts at all four of London’s music colleges: The Royal Academy, The Guildhall School, Trinity College of Music, and the Royal College of Music. His PhD work at Dartingon College of the Arts influenced him to create new ways of improvising, techniques Preston later referred to as Ecosonics, a new musical and improvisational language he developed from research and experimentation. His latest work includes duo recitals with baroque flutist Amara Guitry and the development of an improvisation ensemble with acoustic composer and cellist Thomas Gardner. Of Stephen Preston’s teaching style, Amara Guitry said, “Dr. Preston is an extraordinary teacher; he inspires and guides rather than dictates. Always extremely generous with his time and knowledge, he is that rare teacher that does not tell you what to do, but instead helps guide you to your own musical personality. He is constantly teaching others and sharing in the learning process, leading the way with openness to new musical experiences.”