Walfrid Kujala has been a member of the Chicago Symphony since 1954 and a professor of flute at Northwestern University since 1962. Previously he had been a member of the Rochester Philharmonic and taught at the Eastman School of Music where he had received his M.B. and M.M. degrees, studying flute with Joseph Mariano. Kujala has appeared as soloist with the Chicago Symphony under Sir Georg Solti, Fritz Reiner, Antonio Janigro, and Seiji Ozawa. In honor of his 60th birthday, his students and colleagues commissioned a flute concerto from Gunther Schuller, and he premiered the work with the Chicago Symphony under Solti in 1988. The following year he performed the same concerto with the Spokane Symphony under Schuller’s direction. Kujala is a past president of the NFA and the author of The Flutist’s Progress and The Flutist’s Vade Mecum. In addition to teaching at Northwestern, he is currently a visiting professor at the Shepherd School of Music at Rice University. 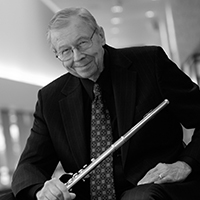