Katherine Hoover is a multifaceted artist—flutist, teacher, entrepreneur, poet, and, most notably, a distinguished composer. A prodigy (she read music at age 4), she is also, as a woman composer, a pioneer in her field. Hoover’s work has garnered commissions, awards, and accolades including a 1994 American Academy of Arts and Letters Award in Composition. In 1996, her Dances and Variations and its premiere at the Kennedy Center was chronicled in the PBS documentary New Music. Ten of her pieces have won the NFA Newly Published Music Competition. Born in Elkins, West Virginia, Katherine Hoover grew up in Philadelphia. She holds a performer’s certificate in flute and a bachelor of music in music theory from the Eastman School of Music, where she studied with Joseph Mariano. She studied with William Kincaid for two years before moving to New York, where she taught at Juilliard’s Preparatory Division and, in years to follow, performed at leading halls in New York. In 1969, she began teaching theory at the Manhattan School of Music, where she also earned a master’s degree, and remained there for 15 years. 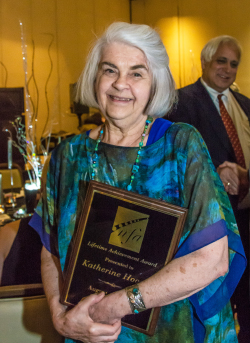 Hoover began to arrange and compose during this period, drawing inspiration from many sources for her pieces, including The Medieval Suite (inspired by Barbara Tuchman’s A Distant Mirror),which won the NFA’s 1987 Newly Published Music Competition. Although known for her works for flute, Hoover also composes orchestral, vocal, and chamber works for other instruments, including the tone poem Eleni: A Greek Tragedy, Op. 36; Two Sketches, commissioned by the Bay Area Women’s Philharmonic; her Clarinet Concerto for Eddie Daniels; the Quintet Da Pacem for piano and strings, commissioned by the New Jersey Chamber Music Society; her Double Concerto for two solo violins and orchestra; and other works.

Hoover launched her own publishing company, Papagena Press, in 1990 and inaugurated it with the publication of what today remains her best-known work. Kokopeli, for solo flute, was written during a trip to the Southwest and is inspired by Native American legends, arts, and cultures. To date, the piece has sold more than 11,000 copies.

Other major works include Three for Eight, a joint commission of the New York and Long Island flute clubs, Canyon Echoes for flute and guitar, Winter Spirits for solo flute, premiered in Philadelphia by Mimi Stillman, and Mountain & Mesa for flute and piano, premiered by Stillman at the 2009 NFA convention performed again by Stillman at Hoover’s 75th birthday tribute concert in 2013. In August 2015, Hoover’s The Four Winds for flute and orchestra premiered at the Annual NFA Convention, and, later the same year, she published her first collection of poetry, This Way About, which received an editor’s choice designation.