Jan 25, 2022, 16:11 PM by National Flute Association
We're deeply saddened to share the news that Mark Thomas has passed. In addition to being an internationally acclaimed flute performer, recording artist, and teacher, Mark Thomas was the first president of the National Flute Association and a founder of the organization; we would not be here today if it weren't for his vision, dedication, and willingness to take risks. 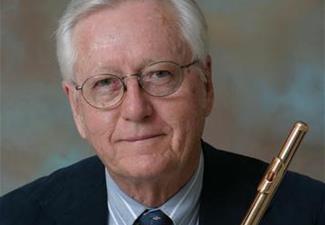 In the July 1976 issue of the NFA newsletter, Thomas reflected on turning a dubious yet persistent dream into a far-reaching reality:

“The National Flute Association was once for me only a dream, infrequent at first but growing as time passed. I shrugged off this seemingly impossible dream, knowing it was far too big an undertaking both financially and physically for me. Yet the dream persisted and began to occupy more and more of my thoughts. Before long I found myself jotting down concrete ideas whenever I had a spare moment, as my dream became a burning desire that had to be fulfilled. Excitement, colored with fear, filled each day as I tried to realize my dream. Perhaps being a Taurus helped as this astrological sign has a trait of stubbornness. I became very determined. One way or another there was going to be an association, a common gathering ground for flutists, a place to exchange ideas, hear flute concerts and see flute-related exhibits. I decided to stick my neck out knowing that the worst thing that could happen would be failure.”

Thomas went on to describe the daunting but ultimately triumphant pursuit of establishing the NFA. He closes with a statement that rings true over forty-five years later:

“Your National Flute Association works twelve months a year for one reason - you. YOU are the NFA.”

Members can read this story of pluck, collaboration, and enterprise here (page 6).

To learn more about Mark Thomas's legacy, visit his Distinguished Service Award biography page. A full obituary will appear in a forthcoming issue of The Flutist Quarterly.